The Spring Racing carnival mightn't be the only place to see Winx in the coming months.

In 1918 Billy Hughes was Prime Minister, we had a King not a Queen, King George V. Our population was just over 5 million. Australia’s first electric train service started and Charlie Chaplin got married.

In 1962, the final section of the Cahill Expressway was open. The Harbour Bridge was only 30 years old. Australia won 38 Gold medals at the Empire games. The Bledisloe Cup was retained by the All Blacks. Gary Player won the Australian Open and Rod Laver won Wimbledon.

Students dominate against Manly securing a position in the Grand Final

A comment from first time Canberra visitors Murray and Helen perched in the stands that “this is great and better than Super rugby” summed up University’s performance last Saturday.

Top four finish in opening round of Aon Uni 7s

Arguably the most prestigious award up for grabs at the Intrust Super Shute Shield Awards Night, The Ken Catchpole Medal is awarded to the player deemed best and fairest on field after 18 rounds. 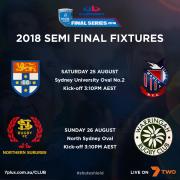 After two days of amazing Rugby in the Austbrokers Finals Series, they are nowjust four teams in each competition. SUFC is the only Club with all seven of teams still in the compeittion and competing in the Semi-Finals this weekend!

Students on target for seven titles

Sydney University ready for Round 1 of Aon Uni 7s

Following Wednesday's successful launch of the 2018 Aon University Sevens Series on campus at the University of Sydney, the University's inagural Aon 7s team is looking toward Round 1 of the domestic tournament this weekend in Hobart.

FINALS FEVER: Taylor-made Students ready for the next step

From the outside looking in, taking up the reins at Sydney University after they’ve just missed out on finals football for the first time in 19 years, and given the increased levels of competition to contend with in the 2018 Intrust Super Shute Shield, seemed a daunting proposition