Former Wallaby Phil Waugh is running for a seat on one of the state's most prestigious boards, the Sydney Cricket and Sports Ground Trust, and wants to help the push to make Allianz Stadium "one of the great rectangular sports venues in the world".

A holder of 79 caps for the Wallabies, including three as captain, the 34-year-old retired in 2011 after a long career with the Waratahs in which he captained the state 58 times. 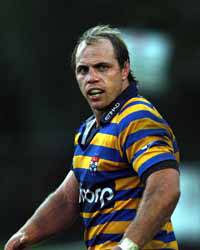 Waugh is one of 29 nominees for two member-elected positions on the board, which oversees the SCG and Allianz Stadium precinct and boasts the likes of Alan Jones, Westpac chief Gail Kelly, Harvey Norman chief Katie Page and former Test cricketers Steve Waugh and Stuart MacGill, as trustees.

Another in the field is former Test bowler David Gilbert, who spent 11 years in the precinct as chief executive of Cricket NSW before his resignation 15 months ago.

Phil Waugh, Gilbert and current trustee James McNally are contesting the two available positions, with another ex-Wallaby Ken Catchpole not standing for re-election after winning the last ballot in 2010.

Four years ago McNally, a property consultant, became the first non-international sportsman voted in by members since the first election of trustees in 1980.

Waugh, who has a career in corporate finance with the Commonwealth Bank, hopes to become a natural replacement on the Trust for 74-year-old Catchpole.

"I've got a lot to add having played at the Sydney Football Stadium for 15 years. I understand the area and the precinct very well," Waugh said.

"I still look back on my career and I was very fortunate to travel around the world and play at some of the world's best venues but some of my fondest memories are at the Sydney Football Stadium with the full crowd and the atmosphere in that precinct when there's a big game."

Of particular interest to Waugh is the future of Allianz – home of the Sydney Roosters, the Waratahs and Sydney FC.

The trust has an ambitious master plan – which follows on from the $197 million new Noble, Bradman Messenger Stand at the SCG – to include a full upgrade and a "clear membrane roof" at Allianz, making it the country's first naturally lit enclosed stadium.

"A lot of people who visit the Sydney Football Stadium have had the experience of visiting Suncorp Stadium and obviously the way that everything works there in terms of the facilities in the stands and the ease of getting in and out of the ground and things like that. It's a great example of a well-structured venue," Waugh said.

"Something along those lines is needed in Sydney and, having the venue there at the Sydney Football Stadium, it's the perfect location for what I believe can be one of the great rectangular sports venues in the world."

"Ken Catchpole was one of rugby union's greatest servants on the field, redefining the role of halfback for all who came after him," Shepherd said.

"In his 22 years as a trustee Ken continued that contribution off the field. He has been an advocate for the members who have supported him and each of the sports played here, but above all he has been a constant strong voice for rugby union at its spiritual home, the SCG and Allianz Stadium."

The trust's 18,500 members are eligible to vote and have until May 27 to lodge their votes.