HARRY JOHNSON-HOLMES: What it means to represent country rugby on the big stage I still remember experiencing rugby as a spectator, watching my Dad play before eventually pulling on the boots for the mighty Cowra Eagles in central-western New South Wales myself. That’s where it all started.

While I got more experience at different regional competitions, the highlight of the Cowra rugby days was playing the halftime game at a Bledisloe Cup game one year.

We moved to Newcastle when I was ten and, while it’s a much bigger city, you’re definitely still in that country rugby pathway. It was hard never being fully exposed to the mainstream elite programs due to distance, but at the same time it exposed to me to the good brand of rugby that you find in the country.

Up the guts, tough carries, and blood, sweat and tears – that country rugby really helped make the player I am today.

Growing up, I was really passionate about studying and taking professional life further in whatever it was that I put myself to. That’s probably why I took my music career so seriously when growing a ridiculous haircut and spending far too much money on floral button-up shirts.

Just being able to see that progression as rugby representation gets more intense, it brings out the better in you in terms of working harder than you thought imaginable. That’s was how I was brought up and it’s how a lot of country kids are too; when you’re faced with a challenge you to rise to it.

To be able to represent all of country New South Wales – a population that makes up such a big part of our state – is immense, especially knowing how thankful and generous the contingent is to our game. It’s always a privilege to be able to give back to those people by representing them when playing higher honours. Every time you get to don the Waratahs’ blue or even the orange jersey for New South Wales Country, you feel very proud knowing you’ve got all of rural New South Wales behind you.

Joining the Waratahs it was great to instantly feel a real electric atmosphere that this year was going to be something special. 2017 might have been a disappointing season, but all it did was add plenty of fuel to the fire. 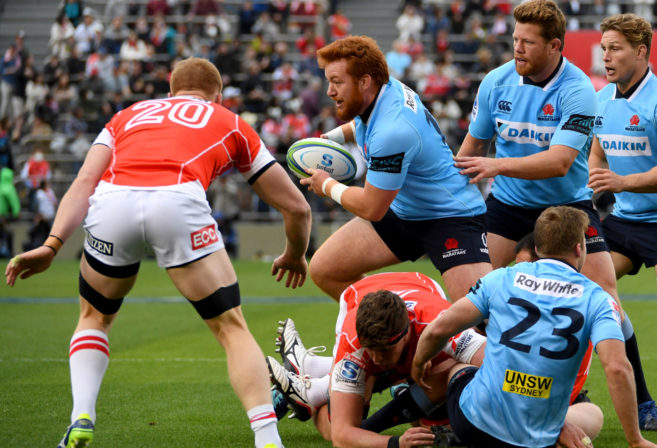 While the vibe was great from the get-go, the group’s confidence has just been rising with each and every game. The wins have obviously been great, but watching everyone adapt, regroup and evolve after a few tough losses has stood out the most.

It’s been a good year – and we’re in a pole position to make it a great one.

Matches like the win against the Sunwolves last weekend are a real confidence boost – and to do it front of our home crowd is very special.

Being able to put the foot on the throat like that, especially against an exciting and unpredictable Sunwolves team, is really encouraging. We’ve had some high pressure games that have come down to the wire, and we’ve been unlucky at times to not come away with the points.

There have been a few times when we could’ve kept the pressure on our opponents but didn’t. Last week, we did and we reaped the rewards.

Every game we assess ourselves and try to work out, not necessarily how well we performed, but whether we gave our best or left some of our potential out on the field. Matches like those are the ones you can say you gave it your all.

A lot of people were talking about the yellow and red cards from that match, and it’s definitely difficult from a player’s point of view to see so many cards coming out.

With the advances in TMO, to be able to actually go back and look at it, for the referee to have clear definitions of what is and isn’t a penalty, what is or isn’t a red or yellow card, it gives you good confidence that justice will be served as per the rulebook.

Our home-and-away season ends this week, and we’re coming up against a big rival in the Brumbies – which is great. What tops it off is knowing we get to do what we love in front of a home crowd.

We’re hoping to make them proud through our play and what we call our trademarks. We’re hoping to show that to a hopefully passionate crowd, and hope they take the passion we’re bringing into the game. It’s obviously a fierce Aussie rivalry, so hopefully the crowd jumps on that as well.

Around the group, we know momentum’s a big thing coming into the pointy end of the year. We have to keep building on what we’ve got, we can’t go into the do-or-die set of final games resting on our laurels.

We want to make sure we can keep that theme of putting the foot on the throat, playing to our potential, and getting that ten out of ten performance.

There’s a lot on the line, but we’re well prepared for it.