The Sydney University "Students" have suffered their first loss of the 2014 Season, going down 14 to 10 to the Manly "Marlins" in a tough contest at the birthplace of Australian Rugby.

Leading into the game, the Marlins had secured bonus point victories in the first three rounds of the competition and were always expected to prove a tough opponent for a young Student side. However, University can hold their heads high in a match that could have gone either way, being able to restrict a dangerous and experienced Manly outfit to only a couple of tries. 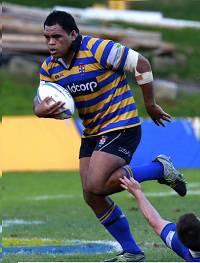 Although Sydney University were bolstered by the return of hard as nails open-side breakaway David Hickey and experienced fly-half Dan Kelly, a tough defensive attitude by Manly in the second half, and particularly late in the game, would prove the difference.

With the Students looking to play an expansive game early, and outside centre Jim Stewart looking dangerous out wide with every touch, it was Manly who were first to register points. At the 10 minute mark winger Alex Northam broke through the defence from well inside his own half and found an unmarked Matt Lucas who scored beside the posts. At 7-0 up, the Marlins had the upper-hand, however the Students refused to lie down and would go into the break with their noses in front. A penalty goal from Kelly was followed by an impressive try to James Dargaville. Noticing Manly were short on numbers out wide, University full-back Stuart Dunbar cut through to send Dargaville on his way. With the covering defence converging upon him, Dargaville stepped off his right foot to beat his man and although he momentarily lost his feet due to another collision, was able to compose himself and find the tryline. Up 10-7, it would be the last scoring play the Students would enjoy for the rest of the day.

They often say in tight contests, taking your opportunities is vital. With the Students enjoying a mountain of possession and field position in the first 10 minutes of the second half, had they been able to registering some points early in the second stanza to increase their slight advantage this may have been decisive in the context of the game (and a missed intercept chance by University replacement Henry Cluines-Ross later in the second half was costly). However it wasn't to be. Having withstood the University pressure, Manly took the lead in the 51st minute through a converted try to No.10 Marshall Milroy and then withstood a series of storming raids in the last ten minutes to secure a tough victory. The 2 tries to 1 win means Manly retain their spot at the top of the Shute Shield ladder. For the Students, it must be noted that despite the result their performance was much improved from the first few weeks of the competition. Leading the way up front were props Sam Talakai, who arguably turned in his best performance in the blue & gold hoops, and Rhys Brodie, who has made a habit lately of dominating the scrum contests. Skipper Tom Boidin was at his usual best and got through a huge amount of work, lock Tom Heslop was strong against a massive pack and Kelly steered the team around with composure.

They also often say the measure of a team is how well they can bounce back after a defeat. Next up for Sydney University is a trip out to Rat Park to take on joint competition leaders Warringah. Another tough contest awaits.