MATCH REPORT | Students commence 2014 season with wins in all grades

Five months of hard pre-season training materialised as Sydney University Football Club's 2014 campaign got off to victories across all teams, at our Super Saturday fixture at Nepean Rugby Park.

For First Grade, this saw a 46-26 win over an aggressive Penrith Emus side. 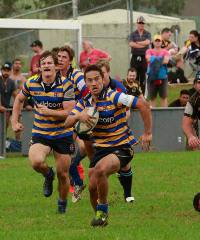 The game was far from one sided as the big Emus actually led University on a number of occasions, with constructive phases and some opportunism with a try scored from a rebounding penalty kick.

However, Captain and flanker Tom Boidon, alias Tom #1, balanced proceedings with a try of his own by crashing through the Emu defence five metres out. James Dargaville, with a season of grade under his belt, used his pace on the right wing to score two tries on the half time bell for University to lead Penrith 17-14 at the break.

The first half also showcased second rower Tom Heslop alias Tom # 2's off season cross training with the Cirque du Soleil with the dexterity shown in juggling a ball behind his back.

The convention at half time whenever you venture to Penrith is to grab a hearty Emu burger from their barbecue. But on day characterised with particularly steamy conditions, you could lay a mat on the field and experience a quick Bikram yoga session through the humidity coming off the ground.

The second half was a repeat of the first with Penrith coming out of the blocks fast with a try. University quickly responded with two tries by left winger Chris Ingate. University's inside centre with the Derek Zoolander looks, Tom Carter, alias Tom #3, grabbed five points by running hard onto a short ball five metres out. A strong forward pack for SUFC First Grade side.

With Penrith a man down through a sin binning offence, University raised the pace. Twinkle toed five eighth Stefano Hunt bewildered the defence and started to spread the ball to each side of the field. Ingate scored another try, whilst inside centre James McMahon and tight head prop Sam Talakai notched a try apiece. Replacement winger John Rudd made his first grade debut in the latter stages of the half.

A bonus point win is always handy, and observers could see that combinations were still being established at this early juncture of the season. However, the ensuing weeks will no doubt see some spectacular rugby and some new players debuting in the famous blue and gold hoops in 2014.