Sydney University continued their running rugby of recent weeks last Saturday at University Oval with a 42-19 victory over the West Harbour Pirates.

Any thoughts of committing any indictable or summary offences would be foolish as there was a bevy of police personnel on site to coincide with the club's annual Services Day. More about the law enforcers later. 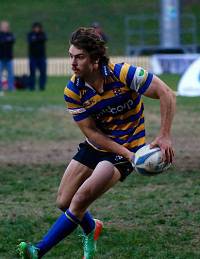 The game was less than 3 minutes old when West's outside centre Usaia O'Sullivan was injured in a tackle and was stretchered off. We hope Usaia makes a full and speedy recovery.

There was no give or take from both sides until the constant pressure applied by the Students saw the first try to the Students. A ball from a five metre scrum was shunted to the right for winger James Dargaville to score.

University continued to press the Pirates in their 22 metre area until Tom Carter stepped up to make an entry in Ripley's Believe it or Not! Rather than spread the ball, it was instead passed back to Carter standing in the five eighth position. Visualising that he was a hybrid Morne Steyn or Jonny Wilkinson, Carter calmly dropped his one and only Shute Shield field goal for the wily old fox to be etched in club statistics!

Carter's action ignited the scoring from then on. Further tries came from the flying hyphen, Henry Clunies –Ross, outside centre Chris Ingate after swooping on a loose ball, and once again Carter scoring from a short ball from five eighth Stuart Dunbar. West's centre Rory Sidey commenced his side's points with a try stepping through a loose Students defence for a 22-7 scoreline at halftime.

As mentioned the day was the annual Services Day to recognise the NSW Police Force and also White Ribbon Day to reaffirm that violence is not tolerated against women. The Constabulary on site brought their own attractions compromising the Police Mounted Police, two tough looking officers in black from the Tactical Operations Unit who were really softies with the kids and a rather cute and furry Constable Charlie the Penguin. There was also the annual 10's show down to enthral the crowd between the NSW Police Rugby team and a University Presidents selection before the main game. This year the leaner Police contingent having substituted carbohydrates with a protein enriched diet avenged last years defeat by downing University 12-7. The coveted shield to the Police was presented by Deputy Commissioner Nick Kaldas and Assistant Commissioner Mark Murdoch. Well done lads!

The second half was a contrast from the first as the conditions were more beastly than a Kim Jong-un haircut. A gale was blowing, the sunshine had disappeared and the temperature was arctic like.

Undeterred by the elements, both teams for the second half continued to play attractive rugby. Tito Mua scored first for the Pirates. In a moment of exuberance the ball was intercepted by Pirate fullback Brooks for an easy converted try.

Stung by this lapse in discipline, straight from the kickoff the students hit back with an opportunist try scored by once again 'The Count' Henry Clunies-Ross. West's let the ball bounce and Clunies-Ross followed through to toe through to regather and score. A further try by Dargaville and a penalty on full time saw the final score of 42-19. A solid win by University.