There appeared early signs of a free flowing game despite the Siberian conditions when the ball was moved through the hands for a second minute try to winger James Dargaville. But Gordon quickly struck back with an intercept to their breakaway Dempsey to level the scores 7-7. University appeared to hold the momentum but Gordon were equally committed to taking the game up to the Students. 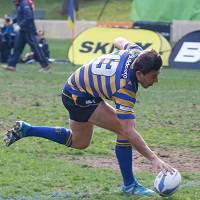 Returning from Super Rugby duties with the Melbourne Rebels, Angus Roberts showed his skills with some neat footwork to slice through the Gordon defence for the first of his two tries. The 14-7 scoreline was again short lived following an adventurous chip and chase length of the field try by the speedy Gordon winger for the Highlanders to lead 15-14. The see sawing scoreline changed before halftime after a Dan Kelly  penalty gave the Students a slender lead of 17-15.

The day also coincided with the club’s Ladies Day.  This annual event is always a good excuse for the club’s lady supporters to enjoy the day sampling tasty treats and quaffing some Pink bubbly as demonstrated by Ladies Day ambassadors Mesdames Hickey and Boidin. Unfortunately last year’s sensation - The Kissing Booth was not functioning.

The second half scoring commenced with a five metre scrum surge which shunted the Gordon pack to the hills of St John’s College. As if he found a winning Powerball ticket, University halfback Jock Merriman with the assistance of his steamrolling pack was elated to take advantage of a gaping hole in the Gordon defence for a converted try under the posts.

Usually this event would trigger University to raise the pace.  Another try was scored by Angus Roberts through quick passing amongst the backline but there were also some missed opportunities.  A potentially spectacular individual effort by The Talented Mr Clunies-Ross was knocked on at the final hurdle in the grandstand corner.

The final 15 minutes of the match failed to reach the impact of an ecumenical gathering, as University’s traditional discipline was marred with mistakes, penalties a sin binning and a late easy try to Gordon.

The cliché – a win’s a win was apt to describe the day. With one final round remaining and a sudden death finals campaign awaiting, assistant coach Dan Vickerman’s words after the game will resonate amongst the team , there are no more easy games ahead and standards must be lifted further.