All photos by AJF Photography 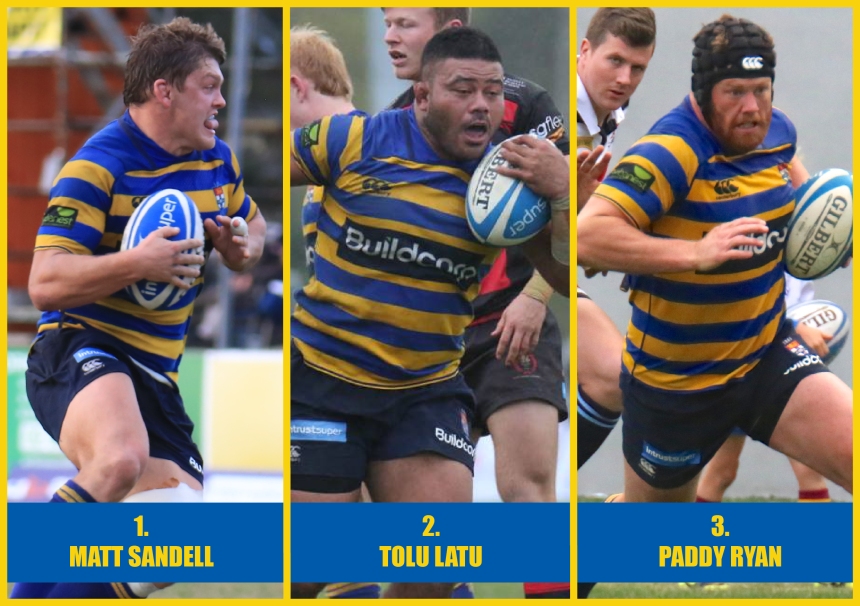 1. MATT SANDELL: Matt has been a big pillar of the team this year, playing in nearly every game. He goes about his business in a very professional manner. We wouldn’t have made it this far without his consistent efforts throughout the season.

2. TOLU LATU: Tolu started the year with us, playing our pre-season games and then playing a further six games prior to the Waratahs not selecting him for their bench. It has been a good story for Tolu and the club to see him rise from club rugby, back to a starting position in Super Rugby, and then onto the Wallabies. Interesting fact, plays the violin.

3. PADDY RYAN: An elder statesman of the team. He brings a lot of experience to the side from a long Super Rugby and SUFC career, not only on the playing field but through his grandfather and father, who both played at the club. 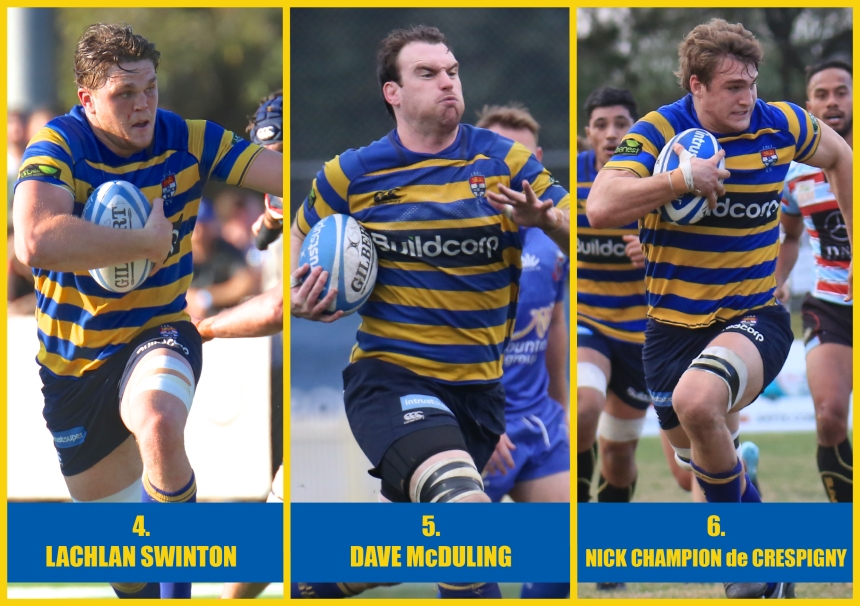 4. LACHLAN SWINTON: Actually played in a Shute Shield Grand Final in his first year out of school. I’m sure we will call upon that experience, as well as the last two years of his rugby playing for the Australian U20s, and being fulltime with the Waratahs. He loves the physical competition out on the field, and just loves his footy and his team mates. Every good team needs a Lachlan Swinton.

5. DAVE McDULING: A very well-travelled rugby journeyman, having played at the Waratahs and Reds, the Sharks in South Africa, and the New Zealand powerhouse Canterbury Mitre 10 Cup team. Currently transitioning out of professional rugby into the working world. While playing all season and working full-time, he has also been chipping away at an MBA.

6. NICK CHAMPION de CRESPIGNY: Born and bred in Canberra, Nick came to Sydney to study at the University back in 2015. He has progressed through the Colts programme, starting in the 3rd Colts team and on to become an integral part of the 1st Grade team in the last two seasons.

7. BRAD WILKIN: A country boy who has also had a stint at the Reds, Brad has made an inspiring comeback after two seasons of back-to-back knee injuries. He has grown enormously throughout the season, and got to make his debut for the Waratahs in the latter part of the year. Another good story of someone starting the year in club rugby, getting his body and game right, and then pushing for higher honours.

8. ROHAN O’REGAN (c): Our skipper. Rohan has displayed strong leadership skills through his Junior rugby days here and through Colts. His leadership has been immense as a first-year Grade Captain, while leading a team that has had many highly experienced players drop in through the season. They have all got around him, which shows the respect the way he has led this team.

9. JAKE GORDON: Like Tolu and Rohan, came through SUFC Juniors and through the Colts programme and is now a Super Rugby player. Jake is one of the most competitive people I know, born to be a halfback, and has the physical attributes to back up the normal halfback chat.

10. STUART DUNBAR: A fair dinkum country lad, who has developed a well rounded attacking game and is highly aggressive is defence. Stu has been there before in 2016 and brings that experience to the backline.

11. JAMES KANE: James is a part-time actor and a real student type of player. He has really maximised his strengths while chipping away on his all-round game. He has already been a Premiership winning player at North Sydney Oval with our 2nd Grade team last year.

12. WILL McDONNELL: A real no-nonsense country lad, who brings a fearless commitment to the contact area and thrives in it. He is a highly skilled player and sees the game very well. He was the only non-contracted player this year to go on the Waratahs’ development tour to Japan, so missed the last time we played Warringah. 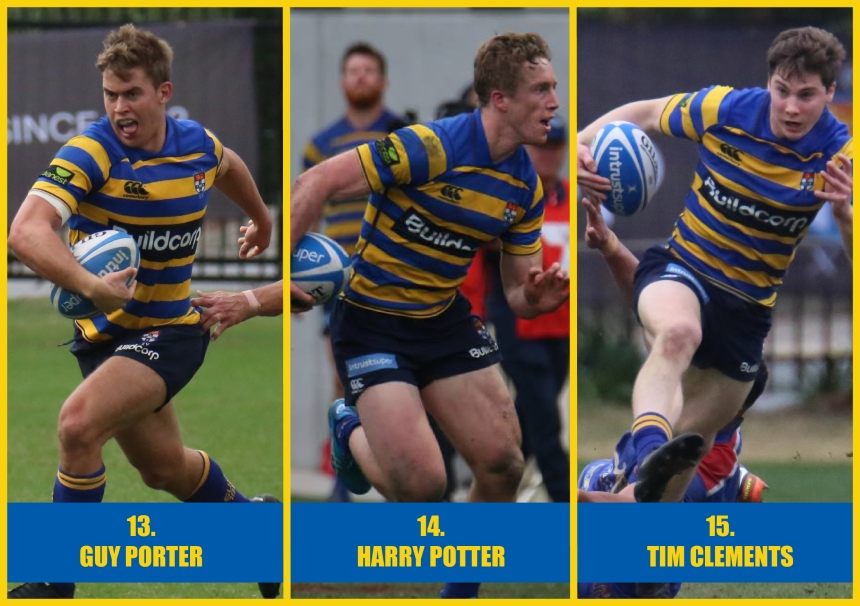 13. GUY PORTER: Currently in his fourth year of law, and is the sub-warden at St Pauls College, soon to be Warden. Guy has speed to burn, is an excellent decision maker, and thrives in the confrontation and contact area.

14. HARRY POTTER: Harry moved up from Melbourne after playing very little high quality rugby in AFL land. He has blossomed in the SUFC programme, and totally immersed himself in getting better. Another one who was still a Colt at the time, to play in the 2nd Grade Grand Final last year.

15. TIM CLEMENTS: An out-and-out fullback, he is perfectly suited for the role. His vision, understanding of the game, toughness and work rate, are exactly what you need as the man in charge at the back.

16. TOM HORTON: Tom is another tough and relentless competitor, who plays like Michael Hooper playing at hooker. He is slowly and steadily building the physical traits to compete in senior rugby. I saw Dane Coles transition from school rugby to club rugby in Wellington, and Tom would be bigger than him at the same age, and shows manly similar traits.

17. HARRY JOHNSON_HOLMES: A Newcastle native who will return to become the Mayor of the city one day, and sing at the local pub on a Sunday down the road. Harry was a bit overawed by the big city lights of Sydney at first, but was surrounded with caring team mates to help him acclimatise to city life. He has been been a big part of the Colts and now the senior part of the club.

18. CHRIS TALAKAI: Coming out of the shadows of his elder brother Sam, Chris is one of the hardest working players at the club and is getting the performances he deserves. Studying to be a teacher, he will be an outstanding leader in the classroom, and in his community in the future.

19. JACK SHARRETT: From the University brethren across the pond, Jack came via Otago University to complete a Masters Degree. Highly passionate about the environment, and how that relationship works in the commercial world we live in.

20. VILIAME (WILLY) COCKER: Willy joined us from Manly after floating around 2nd and 3rd grade. He comes with an immense work ethic and trains with great detail. He has become a core part of our squad, and provides that fresh physicality late in the game for us.

21. NICK PHIPPS: A young fella who started in 3rd Colts at the club after making no representative teams at school. This guy has a big future, watch this space.

22. THEO STRANG: An engineering student who provides cover as a 9 and 10. Theo was another Colt who played in the 2nd grade grand final in 2017, playing at flyhalf. Very quick off the mark and has a good mind for the game.

23. HENRY CLUNIES-ROSS: Henry is the real heartbeat of the team, providing plenty of energy and entertainment to stop us getting too serious. An entrepreneur and student outside of his rugby, he works extremely hard on his game. Picked up a hamstring injury against Eastern Suburbs and is racing to be fit for the final.