The NSW Waratahs can confirm that Tom Horton has been promoted to the senior squad for the 2020 Super Rugby season.

Congratulations to Josh Kemeny who has signed with the Melbourne Rebels ahead of the 2020 Super Rugby season!

Sydney University welcome back Australian 7s star Jakiya Whitfeld to their line-up for round three of the Aon Uni 7s tournament after her commmitments with the national team at the World Sevens Series.

Lachlan Swinton's NRC season may be over but that doesn't mean he didn't gain anything from his time with Sydney.

Hewson goes out a winner 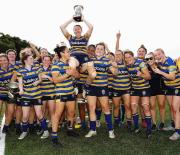 NSW Waratahs lock in Johnson-Holmes and Swinton till 2022

The NSW Waratahs can announce that Harry Johnson-Holmes and Lachlan Swinton have both penned a contract extension that will keep them in sky blue until the end of the 2022 Vodafone Super Rugby season.

SUFC embarked on a 10-day tour to Tokyo on Sunday 16th September to participate in the World University Invitational Tournament, this was the second iteration of the tournament which was founded in 2015 by Oxford University inline with the Rugby World Cup in England. In 2019, it was the turn of Japan and Waseda University.

They say first impressions are the most lasting.

It’s an art young Waratah, Angus Bell has clearly mastered when it comes to his club, and now Country Eagles coach, Rob Taylor. Sydney Uni announce round one team for Aon Uni 7s

During Wednesday night's jersey presentation, Sydney University unveiled their star-studded round one line-up for the 2019 Aon Uni 7s tournament to be held in Brisbane this weekend. 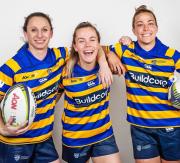 The 2019 AON Uni 7s series starts this weekend as the teams head to Brisbane for round 1.

Fresh off of leading Sydney University to victory in the Shute Shield, Guy Porter has signed with the Plus500 Brumbies for the 2020 season. We are now just 10 days away before 35 SUFC players and staff head to Japan for the World University Rugby Invitational Tournament and the squad and fixtures have been finalised!